Tuesday is normally a normal day, with normal events happening in a normal order. But today that was not to be the case. Let’s start at the beginning.

After a short night of sleep, I awoke at 6.45am. The usual formalities followed, including showering and dressing for work. A hearty breakfast to put some weight in the stomach, a vitamin-filled pill to keep me awake … wait wait. I am going to jump forward 30 minutes.

Stepping onto my morning train, I sat into a seat facing the aisle. With seven other people doing the same thing, I silently reminded myself to pack a good book. I put on my sun glasses to block the morning sun and watched the world go by.

At the next train-stop, a nice couple sat down. Whilst I don’t know them personally, I’ve seen them often. He wears a pin-stripe with Rossi boots and a Crumpler-bag, very similar to mine. With a QANTAS card attached to his zip, I imagine he is a well-paid executive. His wife is pregnant, it’s plainly obvious though none of us mention it. She’s quite a way from giving birth. I nodded, as I do, to suggest a “Hello“, but no recognition was forthcoming. I expected that, we don’t each other. Anyhow, for this article I shall name him ‘ExecutiveMan’ or ‘E-Man’ for ease.

To their right were two young girls discussing ‘stuff’. Not that I was trying, but generally the younger generation are quite open about their conversation topics, so it was not unusual to hear people talking.

To my left sat three ladies, each reading books quietly. Nobody judged anyone, nobody concerned themselves with the activity around them. The perfect train-ride. Some days I talk with people if the option should arise. But right now there was nothing…

At the next station, a muscular guy stepped on with his bicycle. Although allowed, it was most uncommon to see bikes at this time of day. Not even the students brought bikes.

For the purpose of this article, I choose to name the bike-man ‘Meat Head’ or ‘Meathead’, again for ease. The reason will become obvious soon. 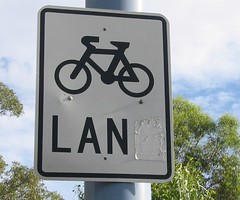 Meathead wheeled his bike on, then leaned it forward and let it go without thinking of the repercussions, then turned left (and away from his bike) to validate his ticket.

In the time it took for him to turn, his bike would normally have fallen over. Yet E-man quickly grabbed the handle-bar closest to him, holding it upright. E-Man was able to quickly move his hand to the cross bar between the handles and seat, thereby holding it steady. “That was quick!” I exclaimed. He smiled, and we all turned to Meathead. Validating his ticket, he turned around to see his bike being held.

“Thanks. You can hold that whilst I go find a seat…“ and before anyone could blink, he took off down the aisle to find a seat. E-man’s face dropped in comprehension, and his wife said something yet not audible. I’ll lay odds it wasn’t nice. No matter. E-man and I both met eyes again. He was lost for words. I decided that this situation was not ideal, so took matters into hand. 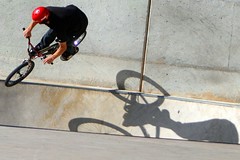 Standing up, I grabbed the bike and said “Let me sort this out.“ E-Man let go and I lifted the bike, amazed at how light it was. Rolling it quickly, I moved it to the door-space where nobody was standing. Lifting it into position, I made sure it would not move. Having traveled on this train so many times, I was aware that nobody would be entering those doors until we reached the final-station in the Adelaide CBD.

That done, I resumed my seat. Nobody had stolen it, the proper etiquette was observed by the normal train-dwellers around me.

But all normality was about to collapse with a ear-shattering crescendo.

Meathead quickly stepped down the aisle, straight for me. Though I forget his exact words, I remember his stance. With his muscle-shirt bulging his well-toned meat, he said words somewhat similar to “Don’t you dare touch my bike EVER AGAIN!”

I sat dumbfounded. In my head I said something like “Hey, I just did both of you a favor. Your bike is safe, and this gentleman doesn’t need to hold it!”, yet all I muttered was “Aha. OK.”

Again, his mouth moved: “No, this is not OK. You are not to touch my bike EVER! Nobody touches my bike, and right now I am angry at YOU and nobody else!!” OK, these were not his exact words, but this was pretty much what it seemed like. Despite being one of eight people facing the aisle in this section – I was to be his scapegoat. In my mind, I was thinking of what might happen next – and none of it was pretty.

None of this made sense, yet I wasn’t in the mood to be treated like scum. As he walked back down the aisle, still muttering obscenities, I made sure he heard me: “Well, I’m glad you feel good now.“ Whilst others would have stopped at that, I was not ready to lie down and play dead. At least not yet.

Meathead stopped and turned. “Yes, I do feel better.“ He stepped back toward me, and with all his meat stood over me.
It was in that moment that I remembered moments in High School. TWENTY FIVE YEARS AGO. Funny how life does that to you. I cannot recall what I had for breakfast, yet I can recall key-moments in my first year of schooling (~1982) that were not the best of fun. A boy learns real fast how fast he can run.

I imagine I stuttered. “A-a-re you k-k-kidding me?“ Meathead stood a little taller. I am so glad I chose to stay sitting. I was quite sure I was taller than him, yet his forearm would have been the width of my thigh. No thanks. Yet I was defiant. 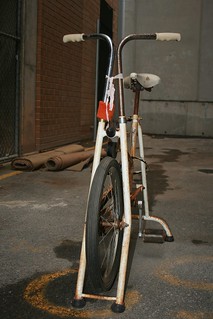 Then came the line that baffled, amused and made a few people giggle, including me: “I am going to SORT YOU OUT when we get into the station!“ Despite this childish comment, I still felt no fear. Don’t know why, but his school yard antics bemused me.

I probably smiled and nodded as he walked away. He took a seat further down the train. I remember opening my mouth, then stopping and sighing. One woman to my far left was my savior with this quick sentence, “It’s OK, let it go. Bikes are not meant to be brought on during Peak hour!“ I said I didn’t know that, and the three ladies and I had a quick conversation on the issue. I looked across at E-Man and his wife. It seems they must have known this.

We traveled in silence for another 15minutes before the train stopped at ‘Mile End’, the last station before the CBD. The train seemed to stop longer than usual, with nobody departing nor entering.

Suddenly the doors shot open and a TransAdelaide worker entered. He looked at me once, then moved down the aisle to Meathead. Leaning down, Meathead was asked a few questions and I heard louder noises from him, whilst wildly pointing arms in my direction. I looked up, just a little concerned where this was going. So far I was not late for work, but would willingly discuss this issue further if necessary.

Somehow I got the balls to stand and say, “Yes, it’s me he’s talking about.“ The train-driver talked to him again, and Meathead was silenced. At least for now. A few minutes later the train took off again, onto the final Station at North Terrace.

As the train reached the outer-yards, many passengers began standing to reach the doors first. Lo and behold, Meathead had to get there first as his bike was blocking the doorway. No matter, no big deal, I figured there was 50/50 chance of this happening. He came down the aisle, all smiles despite his altercation with the TransAdelaide worker. For some reason, Meathead decided there was more to be said to me.

“You’re sitting in the seat that my bike should be in. I have to pay for TWO tickets, so you should MOVE!!“ Thankfully I had been advised otherwise. I’ve been sitting here forever. Yes, the seats fold up, but never has a bike been brought on the train at this time of the morning in the last ten years that I have been travelling of a morning.

“OK…“ My voice and throat was quite dry, but it was only 8.20am. Yet one thought had continued throughout this entire altercation, and I decided to play my hand. “So, now you are talking to eight of us, all the people sitting in these seats. Right?“

His shoulders didn’t drop, but he realised the truth of it. “Ah, yeah. So what?“

But I wasn’t finished, I asked him a question much more important… “Do you work?“

Meathead was quick to respond. “Yes!“

“So, this attitude and demeanor is part of your business? You treat everyone with this abusive, abrasive attitude?“Ok, so I didn’t use these exact words. Semantics. 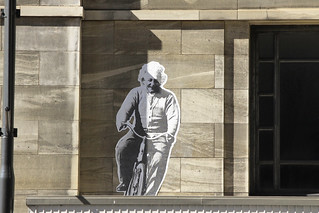 I don’t recall his response to that, but somehow this next question arose: “Do you think this attitude makes you a good ambassador for your boss?“

To which he retorted quite loudly for all to hear: “I AM THE BOSS! I work for myself, I don’t answer to anyone but ME!“

If Meathead had a brain, one would hope he now understood a little more about himself, his aggression and his attitude toward other people is not only childish, it’s hardly representative of any business I want to employee.

Good luck Meathead with getting further work. Tomorrow, should I meet E-Man and his wife, I will be saying Hello!

E-Man approached me when we left the station, shook my hand and thanked me for dealing with the bike. Another woman whom I don’t recall seeing on the train also approached us both and exclaimed her amazement at the whole situation.

Meathead never sorted me out. He rode off to work. Presumably to abuse another potential client. Maybe he should have had breakfast. Weetbix. Oh, yeah, that’s what I had, with milk and no sugar!

Apart from all that, it was a pretty average day. I didn’t tell anyone in my day-job. At the time I was a filing-clerk in a government office. With more self-confidence than a muscle-bound self-employed meathead.

5 thoughts on “Altercation on Adelaide Train”