Let me first premise this article with the dialogue from which the title was born:

There is an art, it says, or rather, a knack to flying. The knack lies in learning how to throw yourself at the ground and miss. … Clearly, it is this second part, the missing, which presents the difficulties.
~ Life, the Universe and Everything (1982)

Many of my friends know the trilogy of books ‘The Hitchhiker’s Guide to the Galaxy‘, so should get a giggle out of the correlation between my overnight roadside activity that has left me battered and bruised and the instructions to successful flying.

Last night my wife and I went for a late walk with a cat on a leash.

A little odd, no doubt, to many readers. Yet, considering what we went through over the previous weekend, a good way for my wife to get some form of closure.

But not everything goes as planned.

We walked one kilometre down the hill with the cat dragged’n’carried most of the way. When put on the ground, we stood by hesitantly wondering what would happen next. She sniffed plants and looked off into the darkness, seeing something that alluded us completely. 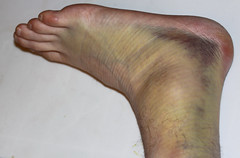 When we reached the turn-around point, my world changed completely.

Within milliseconds my ankle exploded as I stepped onto the edge between the bitumen road and a dirt patch that is slightly lower than the road. I’m now officially allowed to swear like a trooper!

As the ankle rolled inward, I must have screamed like a lion/baby.

As I was caught unaware, I had no time to bring my hands up nor regain my balance. The pain was so intense that I collapsed, but not so as to faint. My arms were crushed inwards, so I face-planted the road. The right side of my face looks like Stallone after 23 rounds.

Here is all the damage I sustained: 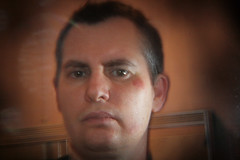 After five hours in the Flinders Medical Centre, numerous nurses, a radium-dispenser machine (X-rays to my ankle and elbow), and a 23yo doctor, I hobbled out on one crutch.

Thankfully I have strong painkillers, but it means I fall asleep at a moment’s notice. Right about now I’d love a Pan Galactic Gargle Blaster …

This was written by a Facebook friend this morning when I told everyone about the situation:

The kitty in the city
on the lead, made him bleed
from a trip off the strip
just the thing he did not need 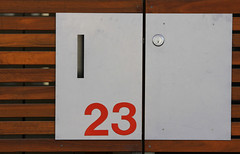 To avert his mortal hurt
he put his bets upon the Netz
stuck a call upon his wall
“Make me laugh!” we heard him plead.

So we’re funning and we’re punning
posting links (tho mine quite stinks)
putting smiles on his trials
Cuz true friends we are, indeed.

Good friends are hard to find!

2 thoughts on “How to Fail Miserably at Flying”