On Monday afternoon (30.Jan.2017) I decided to take my Canon EOSM with 22mm Lens with me on one of my daily exercise walks.

Originally I had intended to walk into Kingscote to get a coffee at Chocol’Art, but somehow I chose to go in the opposite direction: I went up the hill – and discovered the Hope Cottage Museum!

I had been told about the ‘Museum before, and you’d think that after visiting KI so many times over the last 20 years I would have visited already, but I had not yet.

So I readily paid my coffee-money (seriously, it costs so little) to step backwards in time to the yesteryear’s of Kangaroo Island.

Hope Cottage, built in 1859, is the restored home of Charles and Michael Calnan. The brothers, aided by a ship’s carpenter, built three small cottages from local stone. They were named Faith, Hope, and Charity. Unfortunately Faith has long since gone, but the National Trust have restored maintained Hope Cottage with the surrounding museum, along with the recreated Cape Willoughby Lighthouse. Charity Cottage, now a private residence, remains alongside.

Hope Cottage Museum is run by a team of volunteers. A dedicated group of people give of their time in various ways to maintain this fine museum. There is a group that cleans and maintains the indoor exhibits, and another group that cares for the outdoor and machinery exhibits.

I am so glad I had my camera with me. Peruse my photography below: 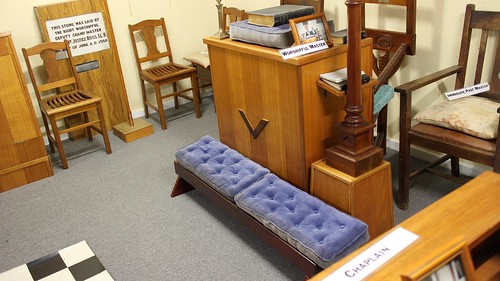 I had a chat with a few volunteers at the Museum, and now am very glad for doing so. Seems they recognised my video from a few nights ago:

I am so going to love living on Kangaroo Island!