This was originally written as a comment to If You Never Hear From Me Again by David Simmer II . But once I got started, it turned into the last short story about our blue insignificant planet.

Planet Earth is nearly barren, one very large dust-bowl. The only nuclear warheads not destroyed are half-sticking out of the earth waiting for the button to be pushed.

The sound ‘Trump‘ wafted on the breeze, the last sound made by every human on the planet right before they were all wiped from existence. Weeds retake the cities, one mound of melting tissue at a time.

Volcanic explosions continue to rack much of the planet, bellowing loudly, spewing molten rock down on the concrete, steel and glass junkyards below. Neon signs no longer flicker, all the power-plants have ceased.

In a small town named Salem (about 190 miles from Seattle) in Washington State, one man remained. The quadruple-story bunker built beneath his home for him and his cats somehow is resisting the movement of the earth’s crust as tectonic plates relentlessly drift. He opens yet another can of Spam, but this time he doesn’t let the cats get too close. They are now glowing from their last visit to the surface. Now he realizes what’s happened up top, so he ain’t going up there, no how, no way, no time soon.

The cats suddenly turn their heads to the sky and wail. The man feels something move around him … and a wall splits to his right.

When interstellar visitors first landed (okay, crashed) in the 1950’s, Earthlings seems smart, but had been avoided for the most part. Well, that isn’t true.

One teenage Moroff took a wizz in back-alley in Seattle, but somehow left his backpack before both him and his entourage departed. When they returned 12-parsecs (40 light-year) later to locate the backpack, it was 1990 and far too late. Every piece of technology within had been adapted and salvaged in Silicone Valley as ‘new technological advances’:

So the Moroff and his motley crew time-jumped forward to the year 2016, peeped down at us … and left us all alone. For some reason the Moroff wanted to stay away from the White House. Something about knowing the current guy-in-office rather intimately. They weren’t coming back soon.

The last human had died, and very soon after a dozen cats ate their last meal before returning to the surface.

Earth was a good planet. It had so much potential, but it was now gone. Every Atari museum, every archeological dig, every great tshirt was gone. The buildings had finally succumbed and crumbled down to the floors of jungles entwined across the planet.

The mutated livestock had eaten themselves out of existence also. But the bugs were returning. The earth was going full cycle.

The only animal that seemed to survive were feline, ferocious, and running out of food.

Nothing organic remains on the planet. Another ice-age had happened after a nuclear-powered submarine sunk deep below the north-pole. It initially imploded, but the force of air managed to reach the surface … and the cyclonic winds carried the dust down across many green lands, dropping onto unsuspecting whiskered creatures and vines traversing the hills and valleys. 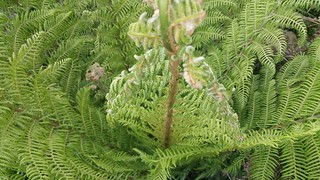 The resulting mutant now survived on bug-lavae, ice-water and corralled bugs. The feline family were growing smarter, developing knees and thumbs out of necessity to find food … but that took a backward step for a while. Returned to a worm like back end, but still a teeth-filled mouth, it wailed louder than the winds as it sought new creatures with which to ‘connect’.

The Moroff-starship dropped to the jungle unexpectedly. Their power-supply had depleted after attempting several times to enter the M-class Planet’s atmosphere. Cyclonic lightning storms filled the upper atmosphere. HoloComD calculations determined a way to use the lightning to keep their power-supply whilst they swung around the storm. The white streaks of electric light arced away from the storm, enabling their ship to direct-line to a specific spot on the planet’s surface successfully.

Backpack and rifle at hand, the Moroff stepped down into the bog.

“Farg. Still nothing here at all…” he muttered, stopping mid sentence as a tall beautiful feline stepped out from behind a tree and waggled one leg as she leaned hesitantly onto a tree. The Moroff stared transfixed … as another dozen felines stepped out from behind the trees, wielding primitive yet bloodied spears. White-eyed, they moved toward the Moroff, who was now petrified.

“So, you are the descendants of the infamous David Simmer II??”

“Farg. So Old Man Trump, that two-bit celebrity who couldn’t even use email, enabled this??”

“Good point. My great-great-grand… He has been dead for 16,003.26 years. Why the farg would we be still talking about that idiot?”

Okay, okay, I took it a bit far. I actually let the story evolve out of nothing. This took me 90 minutes to ‘mutate’ from my fingers (read: to type) it. Hope it gives you a good laugh.